A lesson I learned by using Chao Shao-an as a Master by Example.

Some people look at a painting and think, "I could never do that!" and walk away.

Let me tell you that everybody who ever did a painting was human.

I was struggling years ago and could not find the way to get the work on paper that my minds eye wished to see.

The solution was to tear my paper in half and paint smaller. Work on making the subjects tinier.

For some reason this worked and suddenly my art became something I felt a little proud of.

Is there such a thing?

Here again I tried to find the real tree  and every time it comes out sidelopped. See two posts below this one for that explanation.

The happier side to these lessons were that I actually liked the way the tree side stepped its blossoms. It was as if the Monk had some kind of value or relevance to the nature of it.

The tree I wandered in and out of the Mustard Seed gardens teachings. I am not a professional I state at the outset just someone who is determined to learn and who enjoys the effort of learning such a diverse education. That education being the education of limb control. training my hand to make the movements that represent the same manner Chao Shao-an used to paint his works.

An understanding of the Lingnan spontaneous style has been the most difficult arena I have entered into.
I would recommend it to anyone eager to try the Chinese Arts. I made all the mistakes the naïve do when they start out. including buying ink stones made of pottery. Ink sticks made of car engine oil and highly highly poisonous. on and on..... lessons quickly learned.

Send me a comment if yo9u have a painting you would like included online somewhere outside f a c e b o o k s soul destroying arena.
Or if you'd like one of your own.

So we try and try  again.

here is another attempt and still before I realised that the right sidedness of the tree was a subconscious affair. See previous post for that explanation.

Sometimes the difficulty is stepping outside the standard lessons line and not overvaluing that precious and very expensive piece of Chinese Xuan paper and saying, OK, let's wander off into something different.

It can be very easy to stay on track and keep to the rules. Today I post a p[ainting which in the end took on four different hues because I tried to find out why the image didn't work. the painting.
the reason it didn't work was that the flowers were very off balance. the reason? That the flowers were always off sided???
My Wife has just has  a brain tumor removed. After wakening from the initial operation and having to go into a second emergency operation she awoke finally paralysed down her right side and initially could not speak.

My painting continually came out one sided. This is absolutely true.

So these next few posts are from that period where I tried to find a solution to the painting only to have it pointed out to me by a friend half way across the world. If you're determined enough you will slowly start to see the attitude of the brush resemble Chao's work, or whichever Master you work and learn from by Example. It is a slow road for most and I will never claim I am now or ever will be a Master.

That would be foolhardy.

For one thing I have never been brought up in China, nor have I had the life of a Chinese person.
Nor have I worked, eaten, breathed slept and survived in anywhere Chinese.

So, that massive side of Chinese spirituality will always be missing.
I am western conditioned, regardless of the fact that I hate that branding.

Lucky for us, in the 2000's we can purchase from China the art materials we so badly need from any number of outlets advertising across the world.

Two that I particularly love and trust enough to spend copious fund swith are www.Inkston.com and www.HMayXuanPaper.com because the quality, material range and speed of service as well as the perfect degree of one to one communicationmakes these suppliers the top of anyones list.... if you're serious about the Chinese Arts.

I, for one, cannot stand to use anything that is strictly not traditionally Chinese. Nor do I enjoy using liquid inks, I more prefer to make that black ink from an ink stick because I know that sticks history and I know the forests it came from and I can see it in my minds eye....... and its what the Chinese have done for so many ages past.

As with the paper. As old as I can afford it. I prefer that off white look to it. Tatty edges and torn into shape.

It's something that starts to grow on you spiritually as you as you study the art more and more. It is as if the fibres of Chinese something slowly integrate and help you see what should be there, as opposed to what you thought ought to be there instead.

It is a gentle journey, and one I respect in that THIS is CHINESE not Western. I use Chinese stone for the seals, Chinese bamboo for the brushes. It is as if something has suddenly repelled me from the western side of Art.

I do not look too deeply as to why I enjoy it so much. I simply enjoy what feels to flourish as time crawls on. I am me. I am English. But not neccessarily by nature. 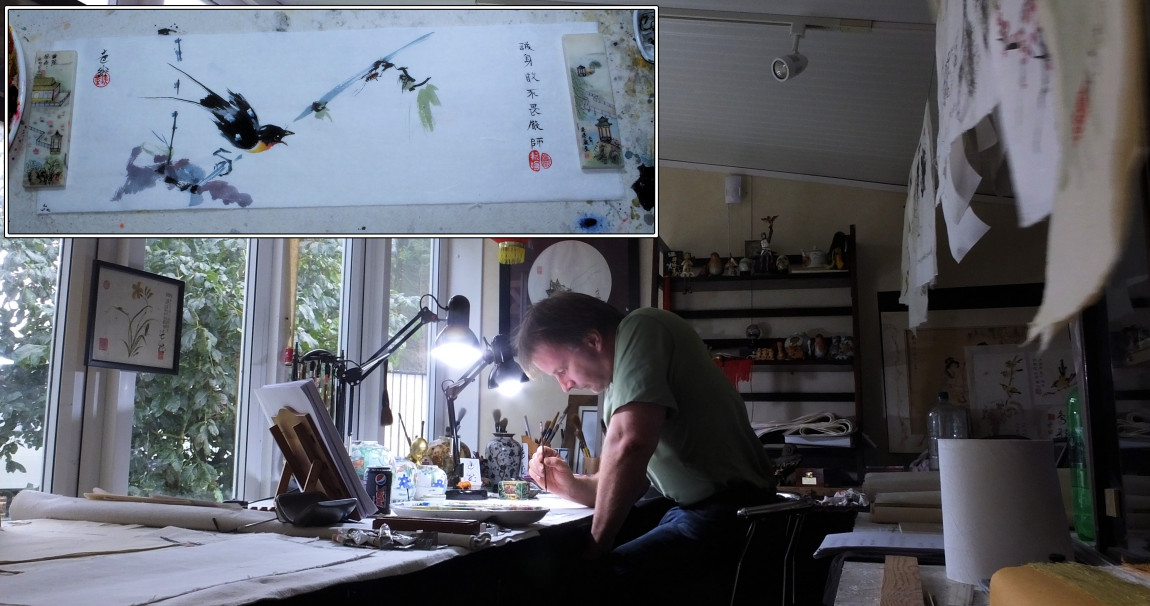 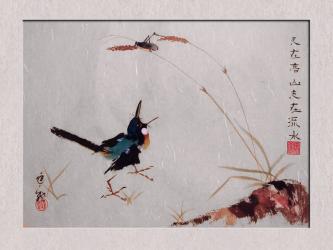