Renowned Chinese artist Zhang Ding, described as "a combination of Picasso and traditional Chinese painting", died on Sunday at the age of 93. 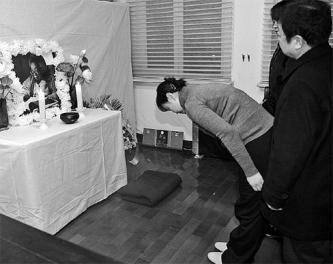 "People pay their last respects to Zhang Ding(seen in inset), a famous artist who died on Sunday in Beijing. [China Daily] "

Devoted to painting for more than 70 years, Zhang was famous for integrating Chinese folk painting and Western contemporary art. He was also open-minded in trying various art forms and critics called him one of China's greatest artists of the 20th century.

"It is hard to give Mr. Zhang a title because he excelled in many fields," says Wang Luxiang, a well-known art critic and television documentary producer. "His versatility in cartoons, paintings, murals, calligraphy and landscape paintings made him a legend in the art circle."

Zhang taught himself traditional Chinese painting at an early age and first made himself known as a cartoonist during the War of Resistance against Japanese Aggression (1937-45). Determined to become a true patriot, he published his works in newspapers, rousing the public to protect their country.

He later moved on to decorations and murals. Zhang took charge of the art design of the founding ceremony of New China in 1949, responsible for the layout of Tian'anmen square. After that, he designed New China's first set of commemorative stamps and the emblem of the Chinese People's Political Consultative Conference.

"Zhang was the image designer for New China," Wang commented, adding that Zhang not only provided a brand new look for China domestically, but also contributed a lot to building the country's international image.

During the 1950s, Zhang was the major designer of China's pavilions at expositions held in Leipzig, Prague, Moscow and Paris. His designs impressed overseas audiences so much that at the Paris exposition several French millionaires even offered to buy the whole pavilion.

But Chinese paintings were always special to Zhang. As an educator, he was the first vice-president of the former Central Academy of Arts and Design, now the Academy of Arts of Tsinghua University, in the 1960s. Zhang studied Chinese folk art for more than a decade and found a lot of similarities with Western impressionism and abstractionism.

"Zhang always encouraged us to be creative. He mixed Chinese classic painting skills with Western contemporary genres, which was quite bold at that time," recalled his student Liu Jude, now a professor in the academy.

Liu says Zhang became a fan of Pablo Picasso at the age of 17. "In Zhang's costume paintings, he liked to use eye-catching colors and abstract painting language. It reminds people of Picasso's works."

The two met each other in 1950 and Zhang later visited museums in Europe, absorbing the essence of Western art.

In recent years, Zhang shifted his focus to pure-ink Chinese painting and insisted on going outside, painting nature under harsh weather conditions. His students say his doctor always tried to stop him because of his age and health problems, but Zhang never took the advice seriously.

"Zhang kept saying to me that he was an ordinary worker in the art world. Only hard work can produce good pieces," Liu says, adding that he was moved not only by Zhang's painting but also his devotion to art.

At the end of January this year, Tsinghua University established a research center for Zhang Ding's art.

"Zhang is a key master in contemporary Chinese art history. His works and spirit are worthy of our respect forever and should be passed down to the younger artists," art critic Wang says.

A little about Chinese Ink Sticks.

More than 3,000 years ago, Asian artisans discovered how to turn the residue from burnt wood into one of the most important and lasting vehicles for human expression: ink. For more than a thousand years, the method of making Sumi sticks has remained the same. Soot from pine is mixed with deer horn glue, molded and kneaded like dough and dried to form a well-shaped solid block which, when gently rubbed against a certain kind of stone with water, turns to ink. It is unsurpassed for producing the famous Five Colors, or shades of black, that form the basis of monochromatic Sumi painting. The subtlety of Sumi ink is evident in the variety of tones and values it produces.

Ink sticks vary in shape and size. Basically because when it is pliable, it is like plastercine and can be shaped as you wish.  Normally it is pressed into a wooden or stone mold and set to dry for some years stored away safely.

The older the ink the better it is to work with but contact and exposure to sunlight destroys it. Be wary of ink stick suppliers because they can sell you crude oil based soot ink sticks and these contain seriously poisonous ingredients.

For me, the best way to make ink is with an ink stone and an ink stick. I dont use any other method. To do something that was done trhousands of years before me is very satisfying simply to create a black mark on ancient xuen paper.

You can also purchase coloured ink sticks and so on but the main black soot ink comes in many forms, even premade bottled form though this contains a spirit that allows faster drying and not to be used on your ink stone. Ink stones are not supposed to become dry. The set ink destroys the surface qualities of the stone and pores and hence ruins further use. In looking at the calligraphy of Wang Fangyu it may be useful to bear in mind several tenets of traditional Chinese thought:

1)  Calligraphy and painting have the same origin in the earliest writing of China, which was often pictorial and gestural in form.

2)  Calligraphy is an unmistakable image or aura of the writer, as clear a reflection as his words, his appearance or his public actions.

3)  The forms and gestures of calligraphy are often understood to be in harmony with the natural forms and forces of the world, for example, the wind, the rain, the flight of the birds.

4)  All of the calligraphy of the past – the graphic record of human consciousness – is a vital repository of sources and references.

The art of calligraphy is the most vivid and direct recording of a creative process among all of the arts of the world.  Every stroke and dot is an instant image of a physical action embodying aesthetic and expressive impulses.  It is also the oldest and – measured by number of artists and works – the densest historical body of art extant, rivaled perhaps only by poetry.

These facts make all the more remarkable and exciting the achievement of Mr. Wang.  Forbidding indeed is the challenge of the past for any calligrapher living in the late twentieth century.  To master and change a tradition so dense, brilliant, and ineffable is a goal few have been able to approach, through there has been no dearth of aspirants.  Indeed, it appears that we are in the midst of a true revival of the ancient art of calligraphy, one that will ultimately clarify itself into a major historical era in the evolution of the art.  Why, in a age seemingly preoccupied with the problems of the present and the future, should there be this resurgence of interest in the most ancient of the arts of Asia?  The other traditional arts, notably poetry, painting, and drama, have been buffeted by the cataclysmic events of our time.  Calligraphy alone has remained relatively unaffected, quietly continuing to write out its story.

The answer, I believe, lies in the probability that calligraphy is the tangible embodiment of the racial and cultural memory of the Chinese people.  Its origins lie in the fire of the oracle of Shang; its history draws into its structure the thought and emotion of the countless individuals – artists, scholars, monks, priests, and warriors – whose lives are the history of China; and it exists today as the embodiment of a nation’s mind and memory.

No one understands this better than Wang Fangyu.  In his art is the past and the present, the individual mind and the mind of a people. His perception of experience is the subject of his art, and the history of the art is the space through which his brush writes.  Looking at Mr. Wang’s images of himself, of his world, and his experience is to see one artist reflecting upon his life, his language, his art, and his history – reflecting upon roots sunk into primeval soil, and upon a heritage he himself is continuing to define.

Many people who have been inspired to write about Chen Chi, including Pearl S. Buck, have dwelled on his mastery of the brush, extraordinary depth of feeling and profound philosophy of life.  When I first met Chen Chi, I was immediately impressed with his energy, indefatigable optimism and quest for peace and harmony in the world. Chen Chi was born in 1912 in the town of Wuxi, near Shanghai shortly after the 1911 Revolution, a time of never-ending wars, which made survival difficult during his youth. During the 1920’s and 1930’s Chinese artists were deeply affected by the ferment of creative ideas emanating from the West.  In his earliest work Chen Chi was strongly influenced by these new currents, which left an indelible imprint on his approach to art and in 1947 he left China for the United States where he continues to reside and exhibit his paintings.

In April of 1999 the Chen Chi Art Museum was officially opened in Shanghai, not only as a place to display Chen Chi’s painting, but also to promote an international exchange of art and education.  China’s President, Jiang Zemin, himself wrote the dedicatory inscription “Chen Chi Art Museum” as an act of personal respect and tribute to the artist.

Because of the artist’s deep concerns and commitments, it is not coincidental that Chen Chi has been chosen as the first living Chinese artist to be honoured with a one-man retrospective of his oeuvre in Versailles.  This historic exhibition is being held in conjunction with the first World Cultural Summit which took place at the Palace of Versailles in June, 2000.

Chen Chi’s painting embraces a large diversity of styles, ranging from traditional Chinese watercolour techniques to boldly Impressionist modes in which the subject of the painting often disappears in a swirl of intermingled colour masses.  Some of his paintings are naturalistic, and others are more abstractly oriented, but much of his work derives from intense observation of nature such as the changing seasons and the constant presence of the sun and moon.

Chen Chi has received numerous honors, including the Special Award for the Watercolor of the Year and the American Watercolor Society’s Bicentennial Gold Medal. He has served on the Board of Directors of the American Watercolor Society since 1959 and is a life-long Academician of the National Academy of Design. His works can be found in many public and private collections, foundations, universitites, corporations, and museums, including the Metropolitan Museum of Art in New York City. He has held many one-man exhibitions, both in the U.S. and around the world.