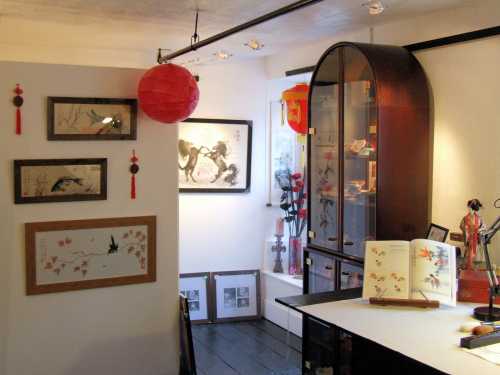 Chinese Art in Europe.
Chinese Artists in Europe are very far and few between. It is an oddity that in every town there's an art store, floor to ceiling art materials from the usual drolls of common western manufacturers, but nothing in the way of Chinese Art itself. Nothing!
And yet in China, take HongKong alone, one can find stores that simply sell Brushes. paint brushes. And the Family that own the store will have made Brushes all their life.
(inset: RaggedyBird.com Studio. Shepton Mallet. Dorset. England.)
Further down the road there's a store that sells only seal stones. Nothing else. It's what their Family have made for Generation after generation.
And further still... ink stones. Paper and so on.
For some reason England itself is caught in some wierd mire of "If we cant hail ourselves as its creator, we can't have anything to do with it!" But then this isn't peculiar to Englanders.
Let's take the books recently on the market explaining how it was, in fact, the Chinese who first circumnavigated the Earth. By some several hundred years in fact.
Talk about upset the Boat of self-praisability standards.
Now England has to rewrite the entire library of bloated self hailing History books... actually, so will the rest of the world.
As England sits in a barbed wire sulk, it is, in fact, the Chinese who are more rebellious to confinement and closed thought. Berkshire alone last year saw an influx of some three thousands Chinese Citizens frequenting universities and opening three, yes that's 3, Chinese Supermarkets AND... ( here's the Frightener for those who refuse to agree that China, is in fact, more than a material used for making Tea Cups...) a Cash and Carry. All Chinese Stock.
So what about the Art then. Well, we have Guanghwa in London Chinatown, a delicious little haven cellar of goodies for Art and Ornamentation. They have been there for half a century selling art materials to the residents of Chinatown and local Colleges for half a century.
Also, they have just recently opened up another small Chinese Art outlet in Liverpool.
Despite the idiotic incessant antagonisms RaggedyBird.com suffers from juveniles like SF108 in YouTube.com (And all the fake channels they have set up as hate channels towards RaggedyBird.com, RaggedyDragon.com and the ChineseCalligraphy YouTube Channel itself ) Chinese Art in Europe is scarce.
Statistics?
Oops, that's a boat rocker for the Hate Mongers who, on the one hand promote the Chinese Arts in a "Look but don't touch" manner, and on the other hand contradict common knowledge in the name of Spite.
Stats then show that Western Artists exist in society to a tune of 1 in every 34 people. Chinese Artists exist as 1  in (Close your eyes SF108)  every 181,000. Well, I'm happy to stick that in my brush and paint with it.  It's what I've discovered after all and as if that's not the cruncher, even with the beautiful diversity of the Chinese Arts itself let alone the actual delicousness of the visuals concerning the materials themselves, no one in England stocks ANYTHING Chinese Art Wise with any degree of seriousness.
And if they do, it's normally a little jar of Paint Brushes they bought from Guanghwa anyway.
Laugh!!! But the peculiarity of this issue is such that, when someone finally has the nerve to waken to this gaping maw in a potential market, (And the finances to boot; Diamonds are cheaper than Shipping from China currently.) the Art Scene will change for ever.
Let's hope it's soon.
Armstrong. April 2011.
( 0 / 0 )